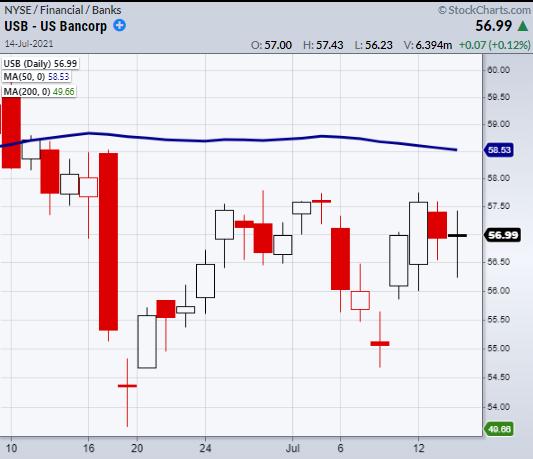 Earnings season is upon us and with, the rising market, earnings expectations have followed. This is especially true for the banking sector, which is supposed to have well outperformed the first quarter. The reason for such predictions can be attributed to banks’ increased profits from low-interest rates enticing a wave of new mortgages and loans throughout the pandemic.

With that said, which banks have the best technical chart setups to trade from a daily perspective?

Wells Fargo (WFC) reported on the 14th and took off towards its 50-day moving average at $45.46. With such a large move, it will need to clear its major moving average, as the 50-DMA represents nearby resistance to clear. On the other hand, Morgan Stanley (MS) is in a strong bullish phase and could be traded on a break to new highs.

Another bank that looks interesting is U.S Bancorp (USB). However, like WFC, USB also needs to confirm a phase change over its 50-DMA at $58.53. Note that both USB and MS report earnings pre-market of the 15th.

Our stance on taking new trades in earning season is normally to wait for the company to report before taking a trade. That makes this week a potential great opportunity to buy bank stocks, as earnings is out of the way and, as laggards, have lots of upside potential should the market hold.

About the author:
Mish Schneider serves as Director of Trading Education at MarketGauge.com. For nearly 20 years, MarketGauge.com has provided financial information and education to thousands of individuals, as well as to large financial institutions and publications such as Barron’s, Fidelity, ILX Systems, Thomson Reuters and Bank of America. In 2017, MarketWatch, owned by Dow Jones, named Mish one of the top 50 financial people to follow on Twitter. In 2018, Mish was the winner of the Top Stock Pick of the year for RealVision.

Subscribe to Mish’s Market Minute to be notified whenever a new post is added to this blog!