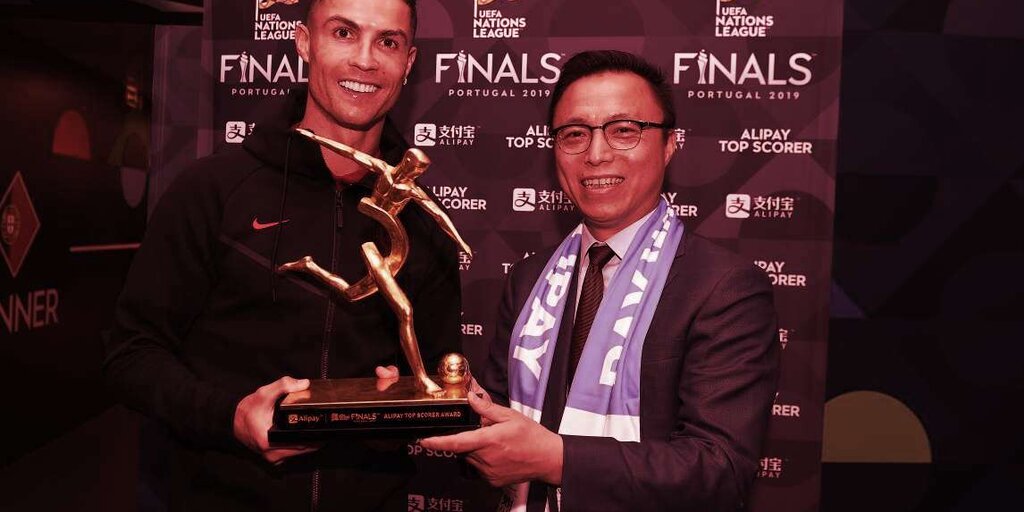 Despite Portugal’s group-stage knockout in this year’s Euro 2020 tournament, the team’s star play still walked away the competition’s leading goal scorer. Portuguese soccer player Cristiano Ronaldo is one of the first UEFA players whose Top Scorer award will also be stored in the form of a blockchain-based digital collectible.

The award is given to the player who scored the most goals in Euro 2020. Previously, the award was only represented as a physical trophy.

The digital collectible is made possible by the partnership between the Union of European Football Associations (UEFA) and Chinese payments giant Alipay inked in 2018.

This year, a special hash code will be engraved at the base of Ronaldo’s physical trophy which corresponds to a unique digital collectible on AntChain, a blockchain network developed by Alipay’s affiliate company Ant Group.

Eric Jing, chairman and CEO of Ant Group said, “Just as we have used blockchain technology to permanently preserve the wonderful scoring moments of the top scorers like him, we will also keep working with UEFA, to explore innovative digital solutions that improve fans’ experiences while enjoying football.”

While the press release itself didn’t explicitly mention non-fungible tokens (NFT), its wording suggests that this is exactly what Ronaldo’s latest digital award is. The collectible’s description suggests that it’s a one-of-a-kind token and “Alipay will upload the trophy data to the blockchain, ensuring a permanent, immutable record of the top scorers’ achievements.”

The championship’s top scorers are determined by their total number of goals and assists. If two or more players are in a tie, the one with the least time played wins. Apart from Ronaldo (5 goals, 1 assist, 360 minutes), Czech Republic player Patrik Schick (5 goals, no assists, 404 minutes), and French player Karim Benzema (4 goals, no assists, 349 minutes) have also won Alipay’s silver and bronze top scorer awards, respectively, which also will be digitized on AntChain.

Apart from being a promotional gimmick, it’s difficult to see a clear point in the endeavor. While Alipay touts them as “permanent” and “immutable,” Cristiano Ronaldo has few peers in the world of sports; no one could effectively misrepresent his achievements as their own.

Additionally, unlike truly decentralized networks such as Bitcoin or Ethereum, AntChain is a so-called permissioned blockchain, which means that a single entity always retains full control over it.

If Alipay or Ant Group suddenly decides to shut AntChain down, all of its records could easily disappear overnight—which doesn’t inspire much confidence in their permanence or immutability.