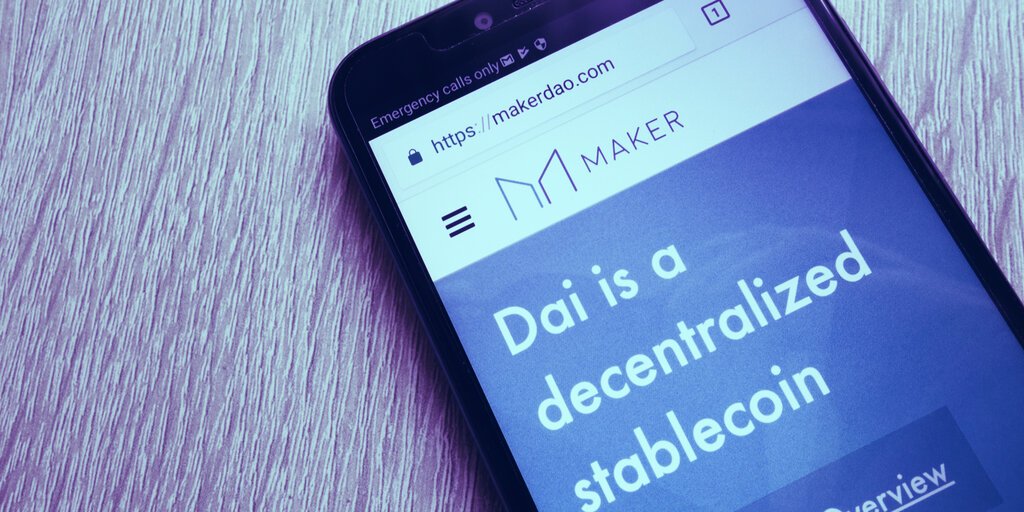 Making good on a promise, Maker Foundation CEO Rune Christensen announced today that the Ethereum-based DeFi protocol he created is now in the hands of others.

“MakerDAO is now completely decentralized,” Christensen wrote in a blog post, continuing: “The DAO is now self-sufficient and the Maker Foundation has fulfilled its bootstrapping responsibilities. The Foundation will formally dissolve within the next few months.”

The announcement has been anticipated for quite some time. In May, Maker Foundation sent MakerDAO 84,000 MKR tokens, then worth $480 million (now closer to $185 million), from its Development Fund as it began winding down.

MakerDAO is one of the original decentralized autonomous organizations, a group of people who harness the (Ethereum) blockchain to make collective decisions about a protocol’s future. That’s done via MKR, currently valued at $2,197 per Nomics, a utility token that’s used to both make votes and stabilize the Maker’s other crypto asset, the dollar-pegged DAI stablecoin.

The DAO’s members have big responsibilities. The protocol they now completely run, Maker, is a popular decentralized finance (DeFi) product that enables people to lend and borrow cryptocurrencies. In keeping with the DeFi ethos, this is all done without intermediaries such as banks. Instead, it’s automated with smart contracts—computer codes that carry out instructions on a blockchain.

Maker’s launch in 2015 revolutionized the capabilities of Ethereum, a blockchain then in search of use cases, inspiring the development of other decentralized financial products, such as Compound and Aave.

The Maker Foundation has been there most of the way, supporting the project as control over it gradually dispersed to all those who hold tokens. Since its creation, DAI has grown into the fourth-largest stablecoin by market capitalization, while the Maker protocol has over $5 billion worth of tokens locked into it as collateral by those seeking crypto loans.

And although it’s disappearing, that doesn’t mean there’s no longer a need for the services it provided. It still takes developers, marketers, and others to keep a multi-billion-dollar protocol running—even if it is decentralized.

Christensen reckons, however, that such operating decisions are best left to those with a rooting interest in the cryptocurrency they hold.

“MakerDAO,” he said, “has come full circle and is in good hands.”