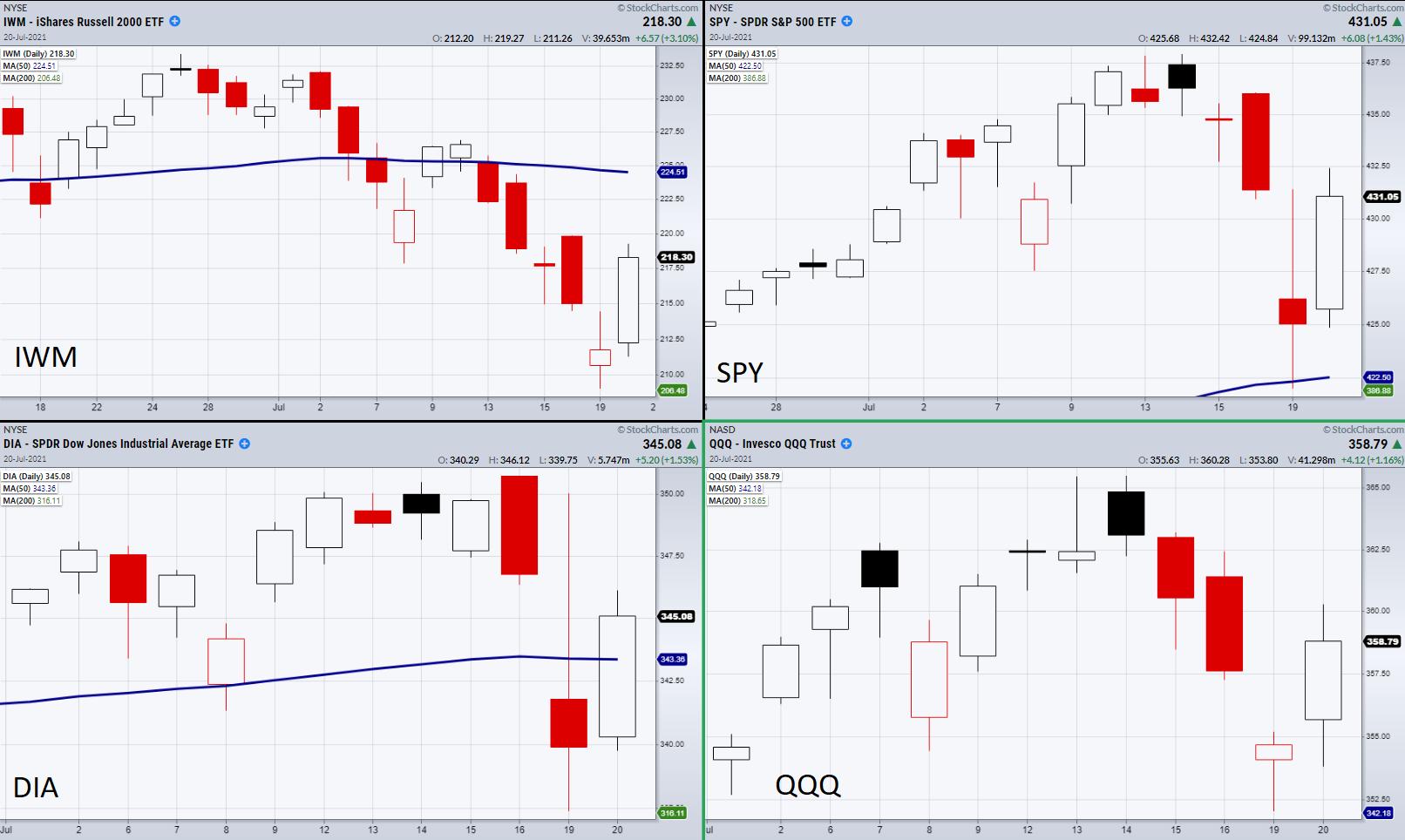 On Tuesday, the 4 major indices confirmed a reversal pattern with a close over the prior day’s high. In the above chart, you can see all four indices created a new support level that needs to hold based on Monday’s low. Having said that, we can now look for similar chart patterns to base our trades from. Additionally, the recent reversal pattern will make it easy to spot weak companies, allowing us to focus on only the ones that offer the best opportunities for a winning trade.

The first symbol is Uber (UBER). This had a clear reversal pattern and can be traded with risk under $44.44 (Monday’s low). Additionally, UBER sits within the back to normal/pre-pandemic trend, which has been a major focus of the Fed’s support throughout the year.

Petco (WOOF) is another company that has a clear reversal pattern. If WOOF holds its pattern, we will look for this push towards a profit target close to the 50-DMA moving average at $22.80.

Looking into the crypto space, Silvergate Capital Corp (SI) pairs not only a reversal pattern with a break over its 200-DMA at $88.81, but it also reported 4.3 billion dollars’ worth of deposits into its banking platform over the last quarter. SI’s caveat is that Tuesday’s large candle range has made it tough to pick an entry point, leaving traders to either watch for a dip lower or to take a more active trade based on a breakout over its next resistance zone, created from the 50-DMA at $102.18.

Overall, looking for clear chart patterns based on the recent 2-day pattern has created many opportunities, given the market holds over Monday’s low in the major indices.

On the Tuesday, July 20th edition of StockCharts TV’s Your Daily Five, Mish runs through the Economic Modern Family. From Small Caps to Bonds to Bitcoin, she delivers timely information keeping you on the right side of the trend.

Watch Mish on Yahoo! Finance as she gives market insight on earnings season and space exploration.

About the author:
Mish Schneider serves as Director of Trading Education at MarketGauge.com. For nearly 20 years, MarketGauge.com has provided financial information and education to thousands of individuals, as well as to large financial institutions and publications such as Barron’s, Fidelity, ILX Systems, Thomson Reuters and Bank of America. In 2017, MarketWatch, owned by Dow Jones, named Mish one of the top 50 financial people to follow on Twitter. In 2018, Mish was the winner of the Top Stock Pick of the year for RealVision.

Subscribe to Mish’s Market Minute to be notified whenever a new post is added to this blog!