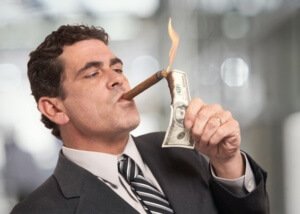 Do you also have a feeling that a market is looking over your shoulder from time to time? For instance, the market sets the stop-loss nearly as you did and then makes a rebound a goes in your predicted direction. Or, after repeatedly testing a strong support – you were about to trade – it breaks it. These things don’t happen by coincidence. Learn the style of the big players to avoid losses! Keep up with the big ones!

The big players possess the best technologies, the best information and teams of top experts to conduct analyses. They are in every way better than you and me. You may ask: Do they ever have any problem, any weakness?

Paradoxically, their weakness has much to do with their money. The amounts of money they wish to trade are too large and bringing such amounts to the market is not so easy.

Market or marketplace is not that complicated. Yes, we do have market makers, automatically buying orders and other tools speeding up the process. However, the bottom line of this is the concept of demand vs. supply. There must always be a buyer on one side and a seller on the opposite one.

If you want to buy, let’s say, 200 000 EUR you must have a counterpart who wants to sell this amount (and accept the adequate value). Well, hundreds of thousands is still an amount for which you will normally find a seller or buyer in the market. But what if you want to buy or sell millions or billions euros. Will you find a counterpart that easy? Most likely you won’t.

So, what can you (or the big players) do about it?

The big players can’t make one large order because if they wanted to buy at the price of 100 and set a buy order with such volume allowing them to find a counterpart the price would grow too quickly. In reality, a bank would utilize (at an ideal price) only a fraction of its position, let’s say, one-tenth at the price of 100, two tenths at 105, three tenths at 110 and so on.

The price would have to grow to attract traders willing to sell.

Eventually, an average price for a given asset would end up at 125 instead of 100, at which the bank was willing to buy. So, what to do?

Big players have to be smart and split each order into a series of smaller orders to save money. To buy the first 25% at 100 and wait until the price falls back to 100 to buy the second, third and fourth  25%. Perhaps, it would be better to split the order into even smaller orders but this would be too complicated so the big player accepts a small price increase. At the end of the day, they will buy at the price of 105 or 106 instead of 100, which is still far better than to fork out on average 125.

The big player did a reasonable thing. So did the market. Nevertheless, the big players are not satisfied. On average, they accept a price which is a bit higher than the one they would prefer. Despite the small difference, if you put all the small pieces in a heap you get a decent amount of money. Also, the big players are aware of having the power to manipulate the small ones and do it. Let’s make a short recap of the scenario.

A big player buys the first portion at 100 and waits until the price gets back to 100 and makes the next trade. The market notices it while small traders wonder that the market reacted twice at the level of 100. The big player makes a third trade at 100. Some small players follow the suit. Now, you can see a very strong line at the level of 100. All small players have drawn the level in their charts. The market reacts typically as to a support level. So far, so good.

The big players know this. What they need is volume or better a counterpart with volume which is exactly what the small ones have now created. Assuming that you believe in the traditional theses of the technical analysis, where will you place your stop loss? A few pips below 100! It’s simply a strong support line. Setting a stop loss below 100 is what the vast majority of small traders is doing. What will be the consequence? An enormous amount of orders, which is exactly what the big players need for making a purchase!

Stop losses below a support zone

What does the above picture indicate? A big player wants to buy 100 billion (of a currency) at 100. He buys 10 billion at 100 and the price, affected by the purchase, goes up. Soon, it turns out that there was no reason for that. The big player does not continue to buy the next 10 billion. So far, the big player has brought 30 billion to the market creating expectations and now collects stop losses. He does not react to 100 (in theory, he may make several small trades to break the level). Now, the 100 level has been broken which generates a large number of stop losses and allows setting an order for the remaining 70 billion. The big player has until now brought to the market the whole volume at an average price most likely lower than the original target price of 100.

The big ones manipulate a market

As you can see above, the big players manipulate the market. Paradoxically, they have to. Otherwise, they wouldn’t be able to deliver such large volumes to the market. If you realize it will be your big advantage. You can learn lessons and set your stop losses below. Knowing which strategies the small are using, the big players tend to choose to stop losses 10, 20 or 30 pips below an important line. Alternatively, you can speculate for the last movement i.e. breaking of a line to enter the trade after the final market comeback. This comeback includes the largest volume to help you earn the biggest profit.

Trade with the big players, not against them

Watch attentively the market and remember that the dominant role in the market is played by the big ones. They have the power and ability to manipulate the price. At the same time, they face a big problem which is the volume of money they want to bring to the market. Be aware of it; it might be your advantage!

A question to consider: Does it ever make sense to rely on support and resistance lines seeing that the big players tamper with the prices whenever they want to?

More about the author J. Pro

Unlike Stephen (the other author) I have been thinking mainly about online business lately. I wasn’t very successfull with dropshipping on Amazon and other ways of making money online, and I’d only earn a few hundreds of dollars in years. But then binary options caught my attention with it’s simplicity. Now I’m glad it did because it really is worth it. More posts by this author