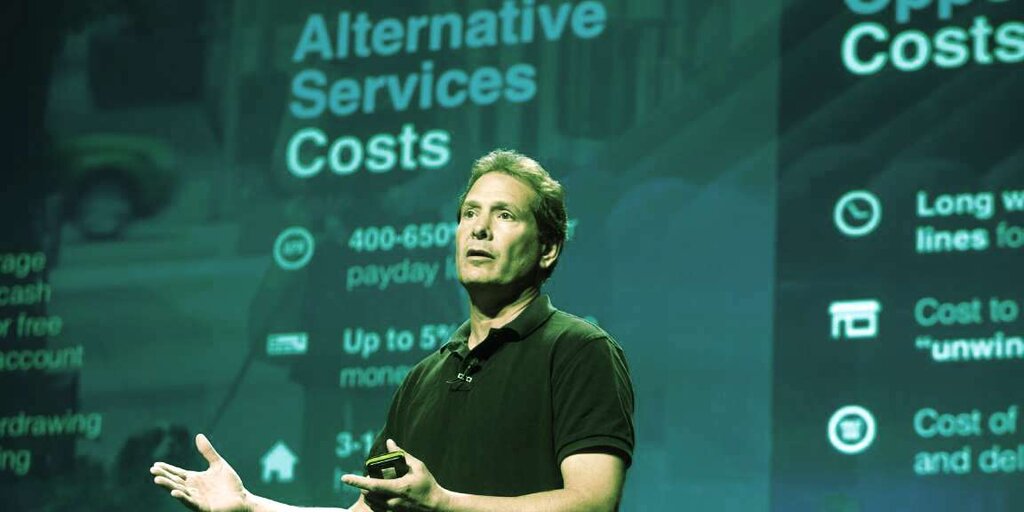 Is there a better way to distribute stimulus payments? The question has come up in light of governments’ efforts to hand out pandemic relief to their citizens—efforts that have often got bogged down as a result of paper checks and other outdated technology.

On Wednesday, PayPal CEO Dan Schulman proposed using digital wallets to streamline these payments, a process that would not be more efficient but reduce fees for the poorest recipients.

“Imagine not having to send out stimulus checks but sending those directly into a digital wallet where you instantaneously receive it, and you don’t have to go to a check cash-in location and exchange that and get charged for that exchange,” said Schulman on an investor call that followed PayPal’s Q2 earnings release.

Schulman also referred to the push by governments to adopt central-bank issued digital currency, which could be distributed by means of crypto-style wallets—and, indeed, such technology is already in use in China.

In the case of the United States, it would take a massive coordinated effort to introduce digital wallets, especially in the case of the millions of “unbanked” Americans who exist on the fringe of the financial system and rely on places like check-cashing outlets. But as Schulman notes, the pay-off could be immense, lowering costs for both the federal and state governments as well as for individuals.

On the call, Schulman also called out the antiquated system that Americans, rich and poor, must rely on to move money between banks.

“I mean the other day, I sent an [Electronic Funds Transfer] from one bank to another bank, and that bank told me we’re taking three days to access that money on the EFT I sent. That’s crazy. It needs to be instantaneous,” he said.

Schulman is hardly the first to grouse about the state of banking in the U.S., as many in the cryptocurrency community have long pointed out how blockchain-based money transfers are superior to legacy systems. And there is an element of self-interest in his comments given that PayPal, which is building digital wallets and conferring with central banks about digital money, would be in a prime position to help governments modernize their financial infrastructure.

But the ideas Schulman raises will be harder for governments to ignore, especially as other major fintech companies–including Square, Coinbase and Robinhood—also push ahead with developing digital wallet technology.

Finally, Schulman also alluded to the promise of decentralized finance or DeFi—a fast emerging technology that involves a series of Lego-like software pieces to carry out transactions with centralized intermediaries.

“How can we use smart contracts more efficiently? How can we digitize assets and open those up to consumers that may not have had access to that before? There are some interesting DFI applications as well,” said Schulman.