After an uneven week of up and down trade, three of the four US major indices—the , and —each closed on Friday at new record highs. Still, there doesn’t seem to be a clear narrative driving traders, though that could change in the week ahead as earnings season ramps up.

While stocks returned in force after their worst selloff in weeks, the Reflation Trade once again was the driver of Friday’s acceleration, overshadowing growth stocks, aka technology shares. Still, it was the , which lists small-cap domestic firms that stand to benefit the most from consumers returning to pre-pandemic spending habits, that outperformed. The index’s 2.1% advance was twice that of the NASDAQ Composite, which didn’t even gain a full percentage point.

Even the mega cap tech firms listed on the underperformed the Russell, gaining only 0.7%, less than a third of the Russell’s rally.

A similar paradigm shift was seen among the market’s sectors. , (+2.9%), outperformed, boosted by rising yields, for the first time in a while, and the prospect of rising interest rates, which would increase profit margins among lenders.

shares came in second, (+2.1%), which makes sense as the companies in this sector would fuel—literally and figuratively—the rebuilding of an expanding economy. To be fair, this sector is also benefitting from expectations of what could perhaps be record demand for oil as summer driving and vacation travel escalate, as economies re-open and consumers escape their homes when lockdowns are lifted.

As well, the among OPEC+ members, which has curbed oil production for now, has been impacting pricing. Nevertheless, the cost of energy generally rises along with economic expansion.

On the other end of the Reflation spectrum, and , which both rose only 0.9%, didn’t do much better than defensive stocks, which tend to underperform during expansion.

Notwithstanding that the tech heavy-NASDAQ indices managed to join the S&P 500 and Dow Jones Industrial Average in record closes, both of the tech indices fell short of joining the latter two benchmarks at all-time intraday highs.

In the final analysis though, as we have repeatedly demonstrated, technology stocks continue to dominate the market this year. This can be seen on a weekly, monthly, tri-monthly and YTD basis. It’s easily demonstrated visually when comparing the charts.

The NASDAQ 100 is pointing higher: 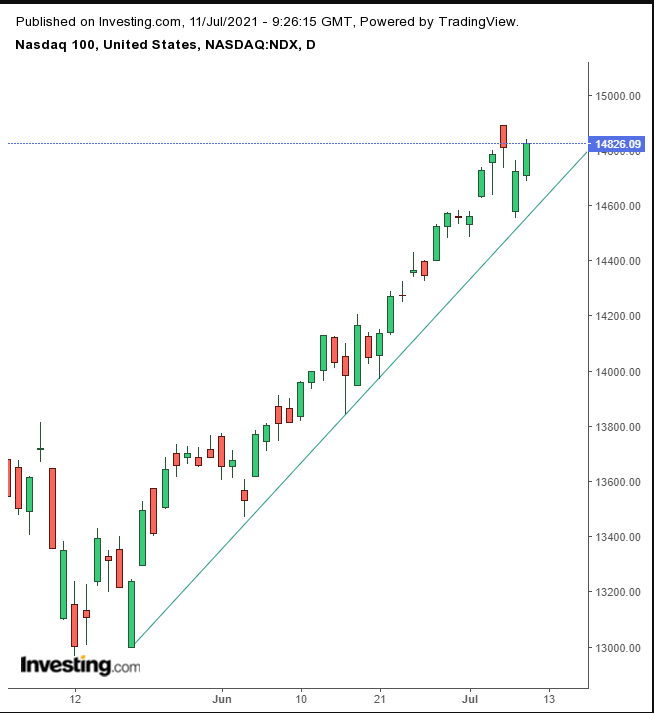 It’s gained 14% since its May low, while trading within an uptrend. On the other hand, take a look at the Russell 2000: 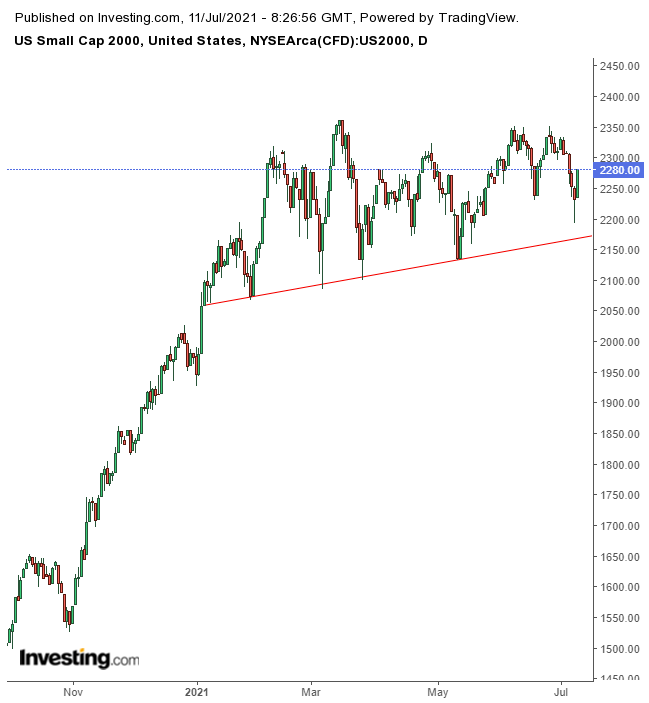 The small-cap index is up only half that amount—6.68%—over the same period. Also, note that it’s trading sideways, increasing the chance of a reversal, with a downside breakout of the neckline since the range began.

Most surprising about Friday’s rally is that this market remains the most expensive in history, meaning nothing much has changed.

Inflation continues on the same trajectory, and the Delta variant is still highly contagious, continuing to wreak havoc in both developed as well as poorer countries. It’s the dominant strain in under-vaccinated countries but also in the US.

Cases of the variant are rising in almost half the states in the US with one health expert calling it “COVID-19 on steroids.”

For all the myriad worries, big-name investment banks including Blackrock (NYSE:), JPMorgan Asset Management (NYSE:) and Morgan Stanley Wealth Management (NYSE:)—which between them manage a combined $12 trillion in assets—are confident second-quarter earnings, with reporting starting this coming week, will demonstrate that the economic recovery remains on track.

Bottom line, we’re expecting more volatility. The market narrative keeps flipping from one extreme to another, sometimes as frequently as from one day to the next as participants claim that the economy isn’t recovering fast enough while others say it’s overheating. And around and around the narrative goes.

Rebounding yields—including for the benchmark note—boosted cyclically sensitive financials on Friday, but can one day reverse the downtrend? 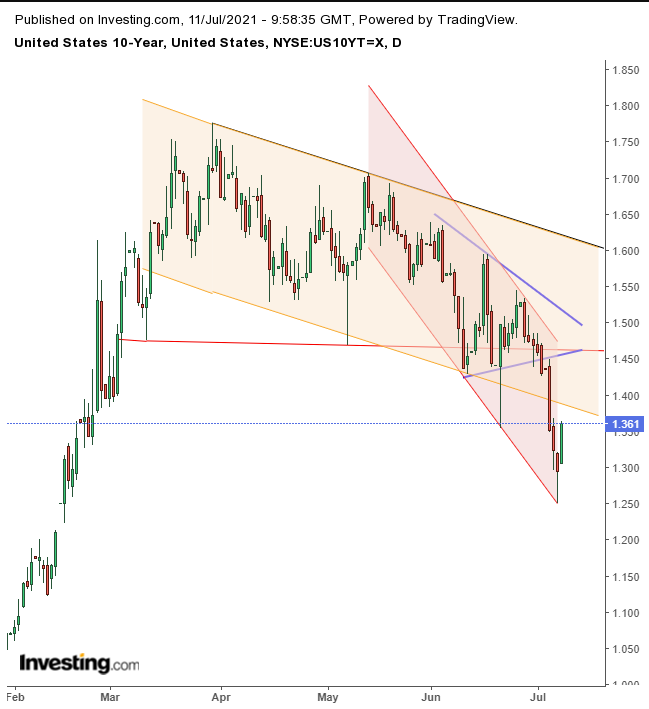 The bounce in rates follows a bearish triangle (blue), which was the market device bears used to top out yields (red line).

Friday’s rise in yields, meaning the selloff in Treasuries, comes after the downside breakout of the bearish triangle, suggesting this rally could be nothing more than a return-move before another leg down, to increase the rate of the drop from the orange to the red falling channel.

The fell for the second day on Friday, despite rising yields and the re-invigorated Reflation Trade, which should have benefited the US currency. Perhaps traders think the Fed will chase inflation up, during which the dollar’s buying power would be diminished. 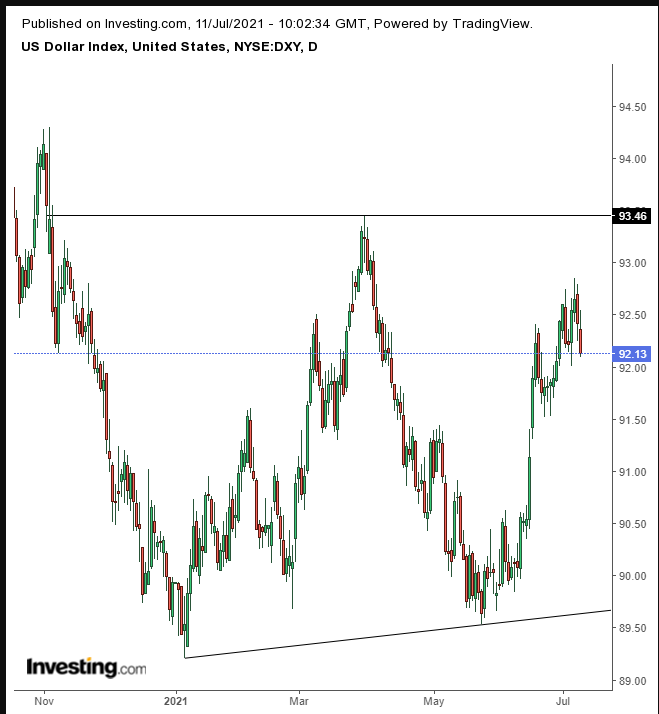 The USD has been ranging since November. The direction of the breakout, when it occurs, will push the greenback further in that direction.

blew out a bearish pennant and moved higher. 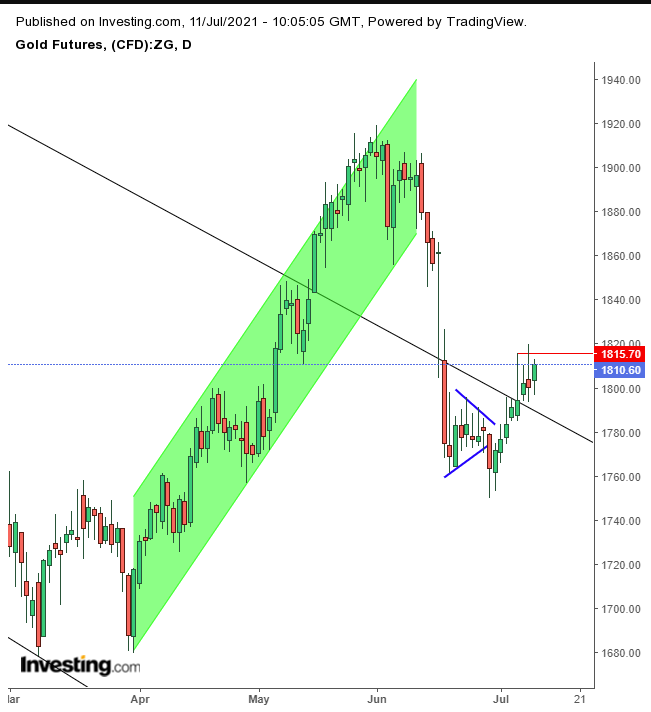 Then the yellow metal climbed back above the top of the former falling channel, though it has been unable to top Tuesday’s shooting star (red line).

was little changed, as trading on the digital coin has been contracting. 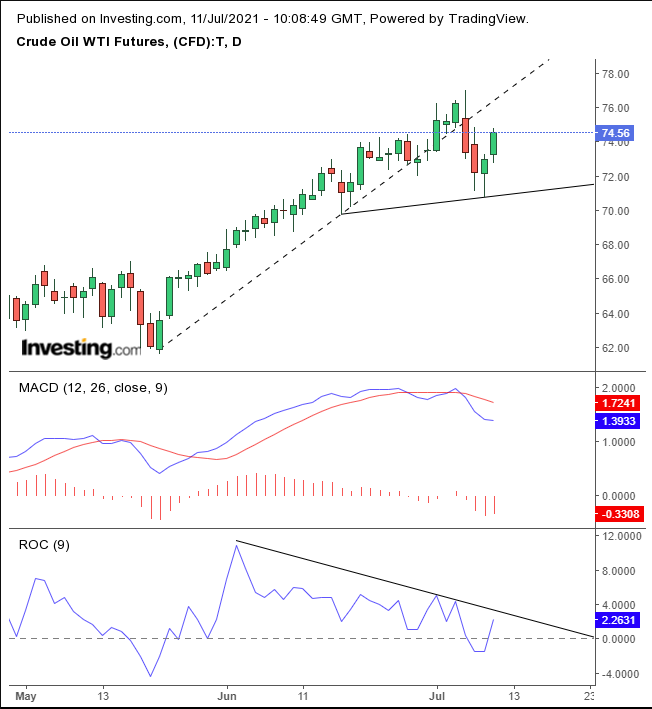 However, after having fallen below its uptrend line and noting how far it dipped its previous low, WTI may be developing a top, as is suggested by the MACD’s sell sign and the ROC’s negative divergence.

All times listed are EDT